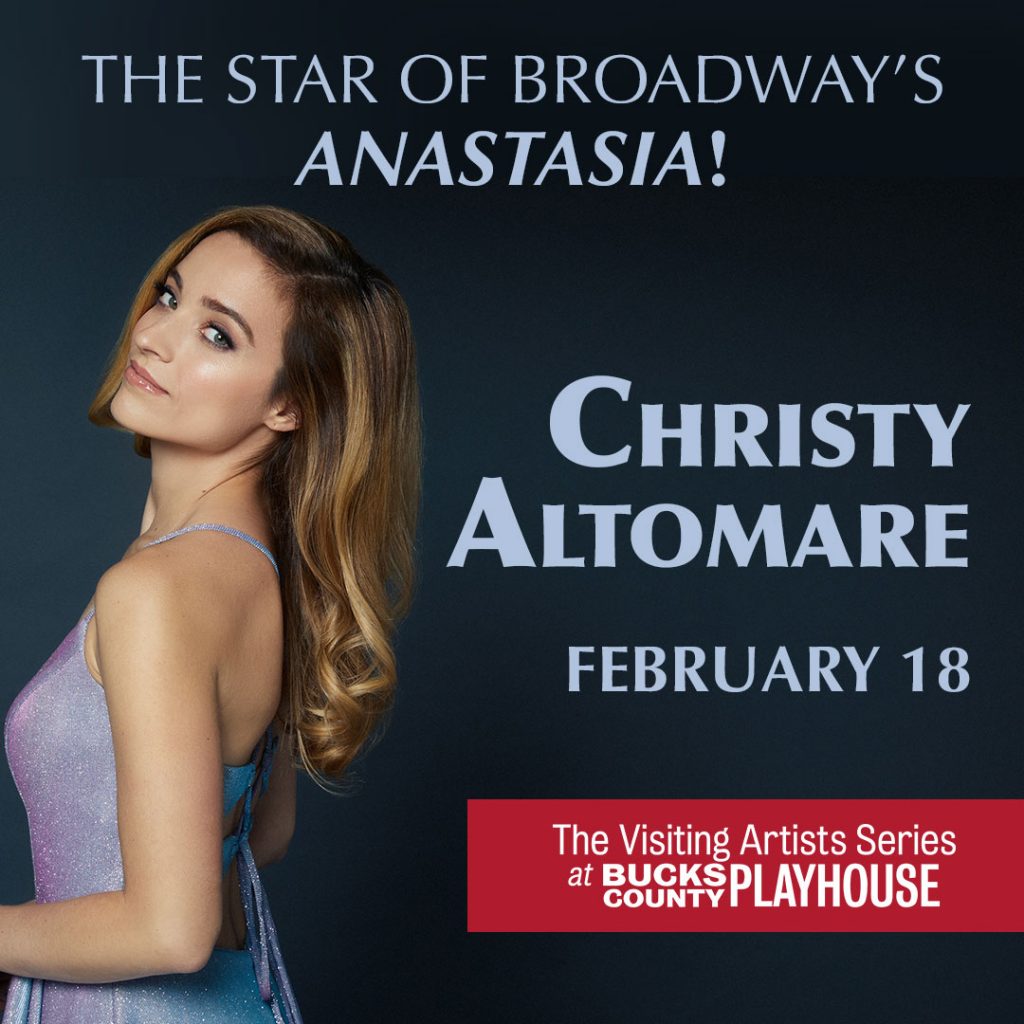 Broadway’s sweetheart and Yardley native Christy Altomare is returning to Bucks County Playhouse, 70 S. Main St. in New Hope, with a new solo concert for one night only on Saturday, Feb. 18, at 8 p.m. This show kicks off the 2023 Visiting Artist Series. Tickets starting at $45 are on sale at buckscountyplayhouse.org or by calling 215-862-2121. Special rates for groups of 10 or more.

Altomare originated the role of Anya in the Broadway production of Anastasia, for which she received the Theatre World Award and was nominated for an Outer Critics Award and a Drama Desk Award for lead actress in a musical. She made her Broadway debut playing the role of Sophie Sheridan in Mamma Mia!. Off-Broadway, she portrayed Sue Snell in MCC’s revival of Carrie the Musical. Altomare can be heard in the cast recordings of both Anastasia and Carrie the Musical. She toured the country in the first national tour of Spring Awakening, playing the role of Wendla Bergmann. Regional credits include Jerusha Abbott in John Caird and Paul Gordon’s production of Daddy Long Legs, Guinevere in Camelot at Drury Lane in Chicago and, most recently, Nellie Forbush in South Pacific at the Aspen Music Festival.

Altomare is a graduate of the Cincinnati College Conservatory of Music. Along with her passion for musical theater, she is a songwriter/recording artist who recently released her new album of original music called Wandering Bird.

“We love Bucks’ own Christy Altomare, back for the first time since she reunited with her middle school boyfriend at the Playhouse. His proposal a few months later on our steps and their storybook wedding were featured in People magazine and became a social media sensation,” said Playhouse producing director Alexander Fraser. “Now she’s back with a new show featuring the extraordinary Ben Rauhala at the piano. The perfect Broadway Valentine to make February sing.”

Bucks County Playhouse’s Visiting Artist Series represents one of the few times on the calendar when outside producers take the stage to showcase their work. Renowned and unique performers from across the country — and around the globe — join local favorites for a lineup that runs through the end of the year.