The famous groundhog saw his shadow this morning 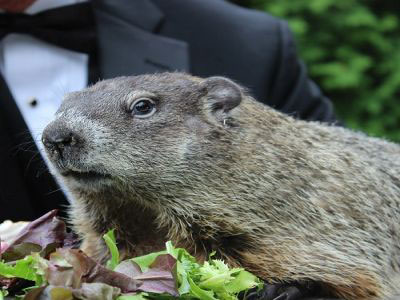 This morning, Pennsylvania’s world-famous groundhog Punxsutawney Phil saw his shadow, predicting six more weeks of winter. For the first-ever virtual Groundhog Day celebration, visitors from all over the world tuned in to see Phil make his highly-anticipated weather prognostication for the 135th time.

“Groundhog Day is a beloved Pennsylvania tradition that has been embraced wholeheartedly by Phil’s faithful fans from around the world for generations,” said Gov. Tom Wolf. “Although we couldn’t celebrate together in person this year, viewers could experience the magic of Phil’s prediction virtually by watching from their homes while prioritizing everyone’s health and safety.”

The story of the holiday tradition declares that if the groundhog emerges early on the morning of Feb. 2 and sees his shadow, we will have six more weeks of winter weather. Should he not see his shadow, we will have an early spring. The annual event began in 1886, when a spirited group of groundhog hunters dubbed themselves “The Punxsutawney Groundhog Club” and proclaimed Punxsutawney Phil to be the one and only weather prognosticating groundhog.

“Punxsutawney Phil’s prognostication is a tradition we are proud to share with the world each year,” said Groundhog Club Inner Circle President Jeff Lundy. “Seeing America’s furriest weather predictor extraordinaire spread joy each February directly from Punxsutawney is an honor and a privilege.”

The virtual Groundhog Day was part of the Holi-stay PA experiences being offered by the Pennsylvania Tourism Office on visitPA.com and corresponding social media channels.

“This year, Punxsutawney Phil and his Inner Circle kept his faithful followers safe by foregoing the in-person celebration at Gobbler’s Knob. In addition to tuning in to the event online, viewers were also able to celebrate with their own at-home festivities,” said Carrie Fischer Lepore, Department of Community and Economic Development Deputy Secretary of Marketing, Tourism & Film. “Beyond Groundhog Day, our Holi-Stay PA initiative extends the holiday season in new and creative ways while prioritizing health and safety. As we look forward to Valentine’s Day, St. Patrick’s Day and holidays in between, we could all use some extra happiness this year.”