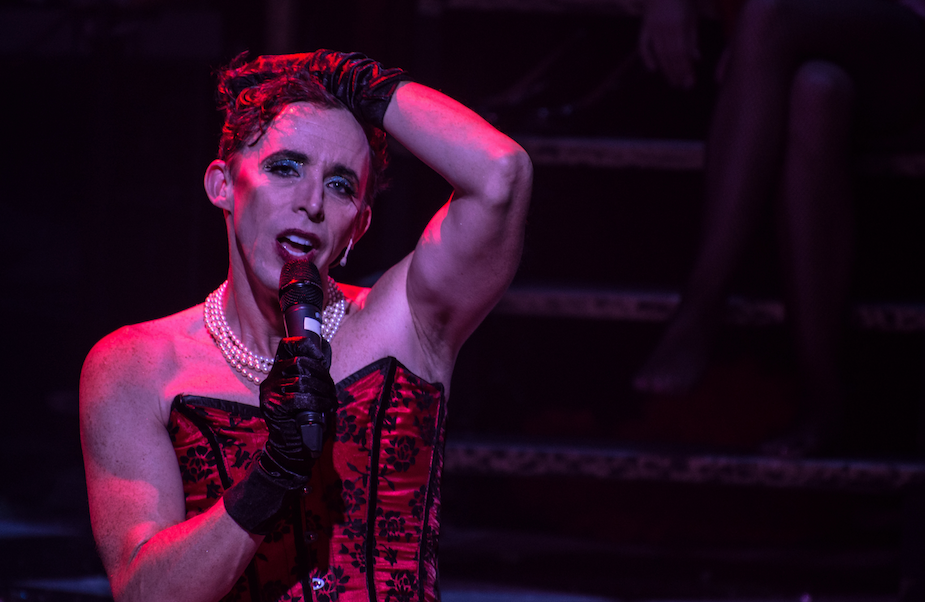 It’s showtime: Kevin Cahoon, breakout star on the Netflix series GLOW, is reprising his role as Dr. Frank-N-Furter in The Rocky Horror Show, on stage at Bucks County Playhouse through Oct. 27. Source: Bucks County PlayhouseIt’s been three years since Kevin Cahoon last appeared on the Bucks County Playhouse stage as the fishnet-sporting “Sweet Transvestite” Dr. Frank-N-Furter in the theater’s annual fall production of The Rocky Horror Show. During that time, the Texas native earned the coveted title of “breakout star” for his portrayal of drag queen Bobby Barnes on the hit Netflix series GLOW.

Now, with added high-heel-strutting experience under his belt, Cahoon is reprising his mad scientist role in New Hope for the fourth and final time, through Sunday, Oct. 27.

According to BCP’s executive producer Robyn Goodman, producing director Alexander Fraser and producer Joshua Fielder, this is the last year the Playhouse will revive the current physical production of Richard O’Brien’s The Rocky Horror Show, which has become a Halloween tradition (except 2015) since the theater’s reopening in 2012.

In the midst of the show’s farewell run, The Times caught up with Cahoon, who said he’s honored to be back in Bucks County.

“It’s wonderful. New Hope is one of the gems of the East Coast as far as towns go. It’s really got such character and history and charm, and the Bucks County Playhouse is one of the most legendary theaters in the country,” Cahoon said. “To do a show like Rocky Horror, which really, the audience functions as a character in the piece, you really feel like you’re a part of the city and a part of the community.”

The Rocky Horror Show, which inspired the 1975 cult classic film, follows innocent couple Brad and Janet as they seek shelter at a mysterious old castle on a dark and stormy night. Here, they encounter transvestite scientist Dr. Frank-N-Furter, who is determined to create his “perfect” man Rocky…all to the beat of an infectious rock score.

When BCP producers approached Cahoon about playing Dr. Frank-N-Furter once again, he jumped at the opportunity.

“He is one of these tortured, damaged, creative geniuses. He’s too creative for his own good, actually. However, my heart goes out to him because he is so tortured by his desire,” Cahoon said. “The slogan of the show, the thesis, ‘Don’t dream it, be it,’ it’s a message that everybody can take away from the evening. Don’t just dream it, don’t just think about it. Put it into action. Make it happen. Create it. You’re in control of your own destiny. All of those things resonate with me playing the role.”

Cahoon said he understands that patrons attend year after year, so he and the rest of the cast finds creative ways to keep the experience fresh for returning Rocky fanatics.

“We definitely bring topical humor into the show. Whatever’s going on in the world that day, we can acknowledge and explore creatively. It’s always in flux with adlibs and winks to the audience,” he said. “It’s reaching out to the audience and letting them know that they’re a character in the evening as well. It’s not just the actors on the stage, and that’s part of the fun.”

This year, Cahoon is also bringing to the stage a newfound confidence walking in heels thanks to his GLOW persona of Bobby Barnes – a character he explained is similar, in many ways, to Dr. Frank-N-Furter.

“Well, it’s an equal amount of makeup, equal amount of pumps,” he said with a laugh. “Bobby Barnes and Frank-N-Furter are both highly ambitious, highly creative, with roadblocks along the way for both of them.”

In Cahoon’s opinion, GLOW and Rocky Horror also boast parallel themes – both speak to the outsider.

“I sort of think of Rocky Horror as some people’s church. It’s where they go to feel inspired, it’s where they go to belong. There’s a ritual to it that is repeated night after night,” he said. “It’s a rite of passage for a lot of people. It’s something they pass down to their kids. It really does feel like almost a holy experience. They come dressed as the characters. They know every single word of the piece. I treat it respectfully as a holy place for people. It’s where they belong, and so I try to be a voice for those who don’t have one, and express what they’re wanting to express themselves.”

“Come see this wonderful show,” concluded Cahoon. “Every show is different. You pay for the whole seat but you only use the edge. You never know what’s going to happen.” ••

Tickets start at $60. Special discounts are available for groups of 10 or more.

No outside prop bags permitted. As in the past, all patrons will receive a complimentary bag of authorized props and will be invited to come up on stage and dance the Time Warp with the cast.