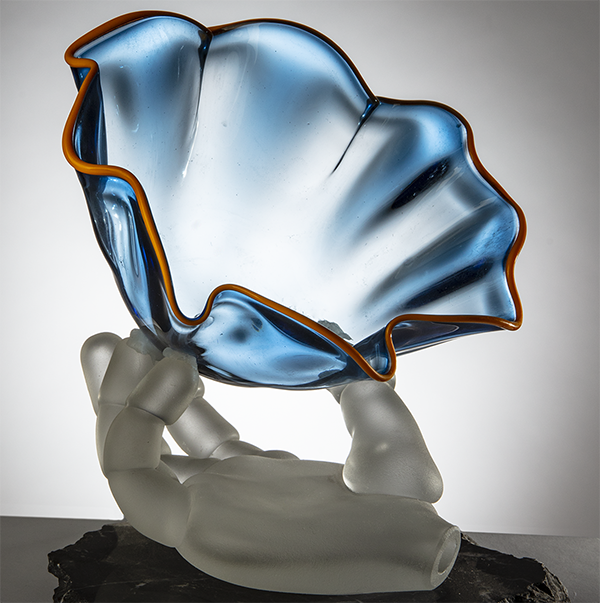 Karl Carter: A Retrospective, the first major gallery survey of Carter’s work, is opening at Hicks Art Center Gallery on Nov. 2 and will continue through Dec. 16. An accompanying exhibition of his renowned students’ work will be installed in the Atrium Gallery in Hicks Art Center.

Spanning the last 40 years, the works in the exhibition range from biomorphic abstract wood and art glass sculptures to exuberantly colored functional tableware and lighting.

Clifford Eberly, exhibitions associate at Hicks Art Center Gallery and curator of the show, said, “His most striking accomplishment is blending subtle and pronounced colors to produce exquisite objects that reveal emotions captured in glass, which we now know is a unique form of matter. Karl has gained expertise in almost all facets of glass blowing and production, which demonstrates his tenacious commitment to being curious.”

Inspired by the founders and teachers of the American Studio Glass movement, like Harvey Littleton and Dominick Labino, Carter continually returns to his initial attraction to the movement to make pieces where form follows function. For instance, to create a dynamic pattern of straight and jagged lines, Carter devised a method to shape and flatten the sides of the glass vessel to better illustrate the representation.

Carter states, “Early on in my education, I was told I approached my work as a concept artist. Though I don’t tackle larger concepts such as politics, I do find ideas that interest me and then work through them, for example, how the chemistry of color in glass works or exploring undulating forms in nature.

Under his tutelage from 1995, a generation of artists have learned to design and blow glass using the facilities he planned and built in the 3D Arts Building on the campus of Bucks County Community College in Newtown. Now the Shipping and Receiving Building, the Glass Program studio and the 3D Arts were originally housed in the Pheasant Barn, aka “Art Barn” of the Tyler Estate before the 3D Arts Building existed in its current location on campus.

This year, Carter retired from Bucks as the Glass Program faculty member in the Arts and Communications Department. He has held various positions at the college since 2000, starting as the web developer, then portal web master, then director of learning technologies and, finally, director of professional development.

Carter was born in Philadelphia and raised in Ohio then West Virginia before returning to Yardley with his family. He attended Pennsbury High School, received his B.S. in industrial design from the University of the Arts, and his M.S. in learning technologies from Drexel University. A true personification of the “lifelong learner,” Carter regularly enrolls in glass courses and workshops, such as torchmaking, to expand and fine tune his craft.

In addition to the exhibition of objects, a video including interviews with Carter, his students and colleagues conducted by Eberly will be shown on the gallery video monitor.

There will be a public opening reception on Nov. 3, from 4 to 7 p.m., which is free and open to the public. Carter will give a short artist talk to introduce the exhibition at 4:15 p.m. Gallery hours throughout the exhibition are Monday through Friday, 9 a.m. to 4 p.m.; and Saturdays, 11 a.m. to 4 p.m.