Learn all about Pennsylvania records and research via Zoom 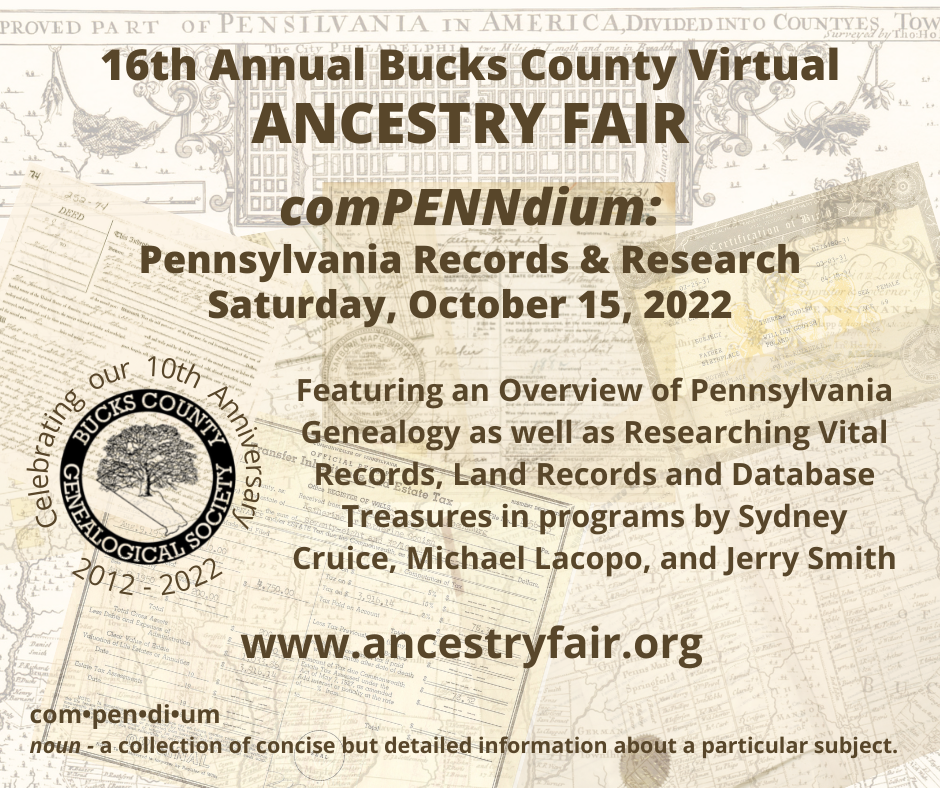 It’s been over 340 years since the colony of Pennsylvania was founded after England’s King Charles II granted a land charter to William Penn to repay a debt owed to Penn’s father. Charles II named the huge territory “Pennsylvania” — literally “Penn’s Woods” — in the original royal charter of March 14, 1681, which is preserved today at the Pennsylvania State Archives in Harrisburg. With that grant, Penn became the largest private landowner in the world at the time.

Pennsylvania was a proprietary colony, meaning the proprietor held title to the land. As proprietor, Penn appointed all officials; created courts, heard appeals and could pardon offenders; made laws and issued decrees; raised and commanded militias; and established churches, ports and towns. The Penn family sold plots of land to prospective settlers and afterward collected annual quit rents from the property owners.

At the Ancestry Fair, the Bucks County Genealogical Society will explore the vast Pennsylvania record sets that have accumulated since 1681 as millions of people have made their homes here. The digitization of records has catapulted recently, with the pandemic as a catalyst, creating access to these documents from the safety and convenience of home. The fair’s lectures will provide insight as to where to research for these record gems, essential for family history research.

Michael Lacopo will lead off with an overview of Pennsylvania history and genealogical research. Sidney Cruice will present two lectures — one on Pennsylvania Vital Records and another on Pennsylvania Database Treasures. Jerry Smith will cover Pennsylvania land records.

Complete information and registration is available at ancestryfair.org. Visit bucksgen.org for more on the Bucks County Genealogical Society.