The senator highlighted local roads in need of repair 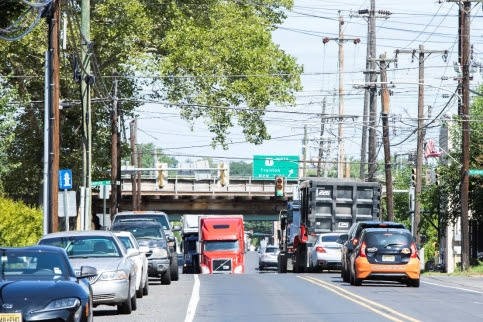 “Many of our roadways are in need of repair and repaving to meet growing traffic demands in our region,” said Santarsiero. “I have strongly supported increasing funding for transportation infrastructure, dating back to my time in the state House, to meet these needs and I am pleased that with a combination of infrastructure funds and state funds from this year’s budget, PennDOT is in a position to tackle some key projects to keep our roads safe and keep traffic moving.”

The road tour began by driving Route 13 southbound to Tyburn Road, focusing on concerns from Falls Township and Morrisville Borough to mitigate truck traffic on local roads. Santarsiero and PennDOT officials agreed that improvements to Route 13, including an acceleration lane at the Tyburn Road entrance, are necessary to ensure trucks follow appropriate highway routes.

Traveling next along Oxford Valley Road in Falls Township, Santarsiero shared widespread concerns from residents of the 10th Senate District about the condition of the roadway and the need for large-scale repairs. PennDOT will be conducting mechanical patching along Oxford Valley Road between Route 1 and Lincoln Highway once the high-volume Sesame Place traffic slows in the fall.

“My office specifically solicits feedback from constituents about the road conditions because they’re out there driving on them every day,” said Santarsiero. “Oxford Valley Road is one of the roads we report to PennDOT most often from constituent reports, so I am particularly happy PennDOT will be repairing this section of roadway.” 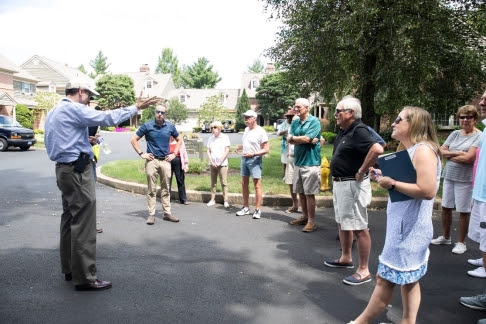 Driving north toward Doylestown, the road tour focused on areas of concern for noise mitigation along highways including I-295, the Newtown Bypass and Route 11.

“As our region continues to grow, our roadways are seeing an increase in both commercial and residential traffic,” said Santarsiero. “Residents across the 10th District have reasonable concerns about the increase in noise coming off the highways and my office has met with representatives from several communities about the issue. My office will continue to look for state funding sources to help with these projects and partner with the county and townships.”

Along Swamp Road in Buckingham Township, Santarsiero received an update on the planned ditch improvements following a June PennDOT traffic study, which will include modifying the ditches to limit car flipping, better ditch drainage and increase signage and road striping. The senator had been working with PennDOT and Buckingham Township to address the need for increased safety measures.

Santarsiero and PennDOT officials drove along Routes 202 and 611 in Doylestown Township, discussing the need for a large-scale capital project to improve the highways, including the entry and exit ramps. PennDOT has committed to continued maintenance and patching of the troublesome areas until funding has been secured for a full improvement project.

Santarsiero reaffirmed his commitment to this project saying, “To see the necessary improvements along Routes 202 and 611 will take a coordinated effort by my office, PennDOT, Bucks County and the municipalities to secure funding and oversee design and completion for a project of this size. We all know this project is overdue and I will be working closely with all of the involved entities to see that this project be put on the PennDOT schedule as soon as possible.”

In Buckingham Township, Santarsiero highlighted the recent repaving along Route 202. He said, “PennDOT did a great job with repaving Route 202 in Buckingham and Solebury Township. We have been receiving robust, positive feedback from constituents about this improvement project. It was my pleasure to work closely with PennDOT to ensure this work took place in a timely and efficient manner, improving road safety and the driving experience for constituents and visitors alike.”