The governor said it ‘falls short on this basic measure of partisan fairness, among other concerns’ 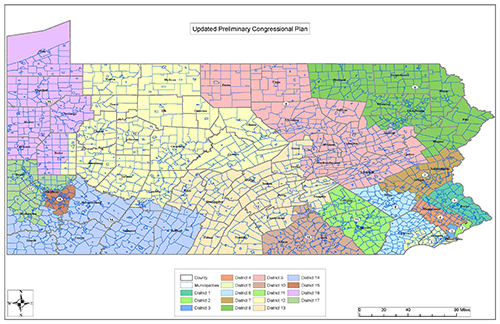 Gov. Tom Wolf has a number of concerns with the House State Government Committee’s proposed new map for Pennsylvania’s congressional districts, which was passed by the committee on Dec. 15.

“I have said from the beginning of this process of redrawing congressional districts that politicians should not use it to choose their own voters,” said Wolf. “Pennsylvania needs a fair map that ensures communities of interest are maintained and the public can participate meaningfully in the process, which are key principles recommended by my Pennsylvania Redistricting Advisory Council.

“The map has significant differences in population among districts, splits multiple communities of interest to improve the chance a Republican will win an election, and falls short on this basic measure of partisan fairness, among other concerns. Pennsylvanians are looking for a fair election map drawn in an open and honest way. They neither want nor deserve a map drawn by self-serving politicians looking to feather their own nests along with those of their political friends. They deserve better and so does our democracy.”

In response, Rep. Seth Grove (R-York), chair of the House State Government Committee, has invited the governor to a public meeting on Jan. 6 to fully discuss the map and listen to the governor’s thoughts of it.

“From the start of the redistricting process, the committee has strived to keep the public informed throughout the open and transparent process,” said Grove. “As such, I am hopeful the governor accepts this invitation to meet and talk about the map in an open forum.”