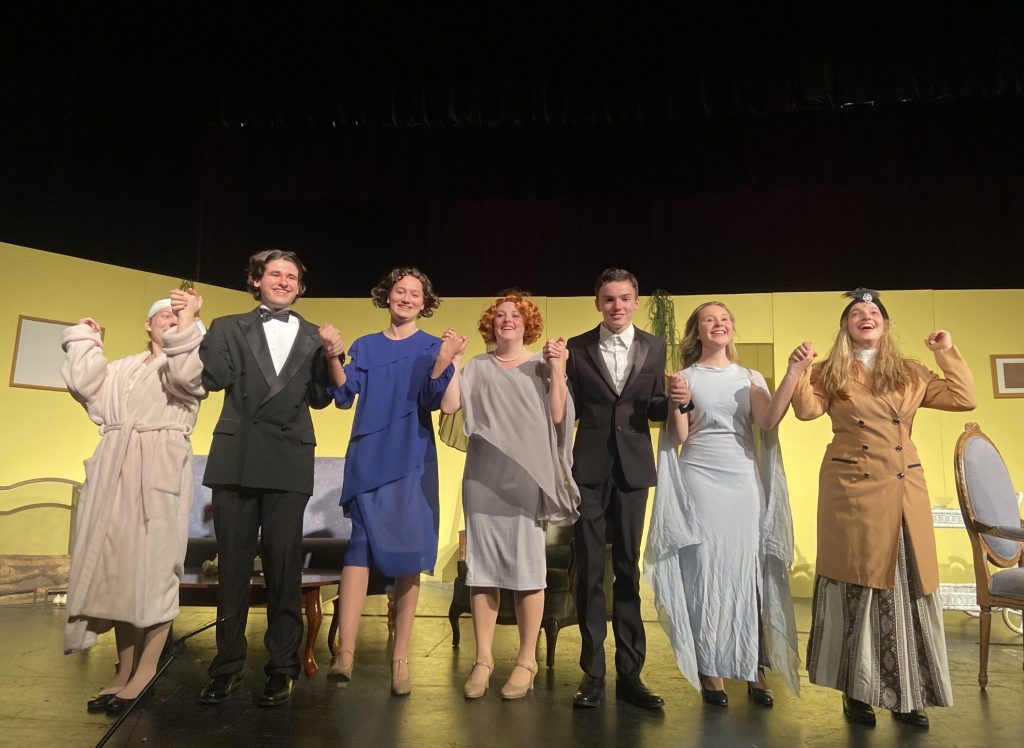 Blithe Spirit is a play about successful novelist Charles Condomime who is about to embark on writing his next book, a novel about the occult. As research he arranges for the eccentric medium Madame Arcati to hold a séance at his home, along with his wife Ruth, his skeptical friend Dr. Bradman and the wanting-to-believe Mrs. Bradman. The evening takes a supernatural turn when Madame Arcati conjures back the spirit of Charles’ deceased first wife Elvira, who makes it her mission to reunite with him forever.

“Blithe Spirit offered the students the opportunity to dive into a British comedy, which is not the easiest thing to do,” said South. “British comedy is dry and based on words, while the comedy we are used to is based in physical comedy or jokes. The actors took this challenge on and have done an amazing job. We have dissected, researched and Googled each phrase, word and situation to fully deliver to you this farce.”

“The students worked incredibly hard to bring their characters to life and made us all proud,” said Fallacaro.

This is the first live fall drama performance since COVID-19 hit in March 2020. The matron of the Pennsbury Drama program Mary Kay Everett passed later that summer.

“In her honor, we are submitting this production for consideration to perform at the International Thespian Festival in June and will be performing it at the PA State Thespian Festival this December,” said South. “We are excited, honored and thankful for the journey that Mary Kay helped create.”

On Dec. 10, for one night only, Pennsbury High School’s Thespian Troupe 830 will then present the one-act The Brothers Grimm Spectaculathon – a short comedy by Don Zolidis & the Thespy’s – at 7 p.m. in the Orange Auditorium at Pennsbury High School West, 608 S. Olds Blvd. in Fairless Hills. Tickets are $8 for adults, $5 for students, and can be purchased at the door 45 minutes before the performance, or online at showtix4u.com.

Join for a wild, fast-paced hilarious extravaganza as two narrators attempt to recreate all 209 of the fairy tales of the Brothers Grimm into one gigantic fable using Rapunzel, Rumpelstiltskin, Hansel and Gretel, Snow White and more. Find out what happens “when princesses stop being polite and start getting real.”

The second half of the evening will include Thespy performances. Prepare to be entertained by the thespians who have qualified with their individual performance to perform at the PA State conference. Students receiving a “superior” rating will present their Thespy at the International Thespian Festival at Indiana University in June, where the highest scoring students win Thespy Awards and are eligible for scholarship opportunities. The following students will be performing: Addison Blumberg, Olivia Byrne, Elise Carey, Meghan Crohe, Cassie Daley, Patrick Diamond, Lexi Harman, Grace Hasney, Ryann Moran, Shaelyn Nuschke, Aliana Rivera, Madison Russell, Carissa Salzano and Macey Webber.