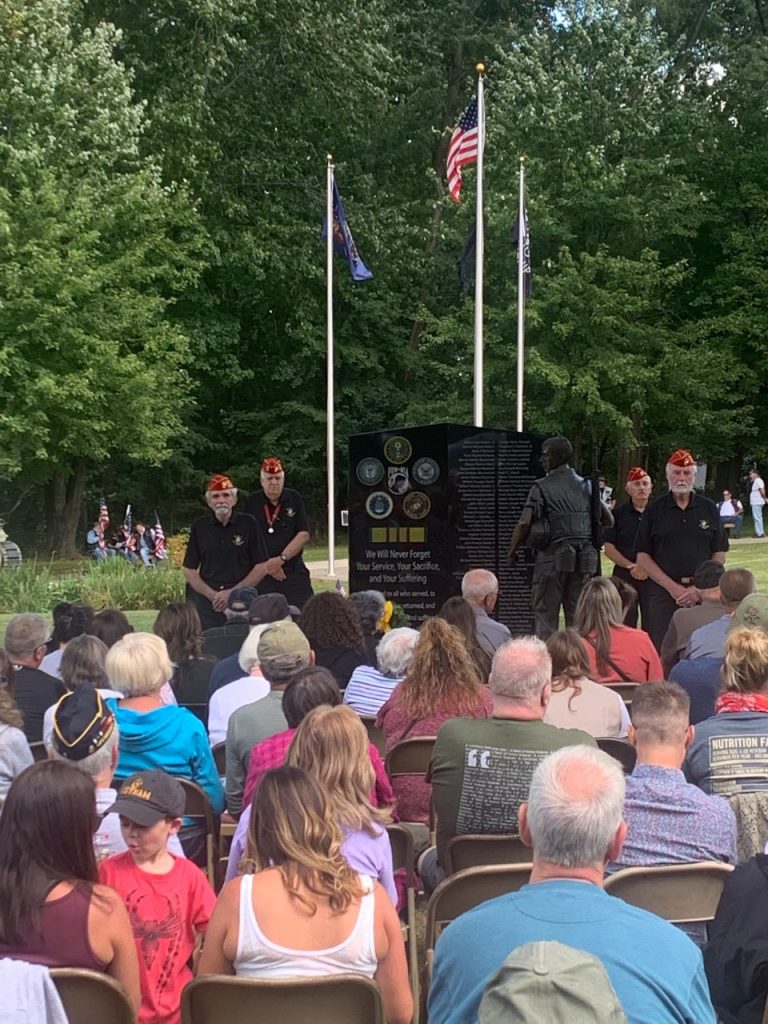 The Lower Bucks County Vietnam Veterans Memorial was unveiled on Sept. 26 at Veterans Park in Middletown Township. A standing-room-only crowd of more than 350 people paid tribute to the 95 servicemen from Lower Bucks County who were killed or missing in action during the Vietnam War, those who suffered the aftereffects of Agent Orange and PTSD, and all who served in the conflict.

In attendance at the dedication were local Vietnam veterans, U.S. Rep. Brian Fitzpatrick, and former U.S. Rep. Patrick Murphy. Sculptor Abbe Godwin discussed the inspiration behind the 600-pound bronze statue that is the centerpiece of the memorial.

“One of the greatest spiritual leaders, the Rev. Dr. Martin Luther King Jr., once said if a man doesn’t have anything worth dying for, he isn’t fit to live,” said Godwin. “It is deeply sobering to realize that our freedom to simply gather here and to say what we think and feel was bought by the blood and suffering of thousands and thousands of Americans throughout our nation’s history, leaving families with a lifetime of loss. Giving their lives, suffering grievous wounds to their bodies, their minds and their hearts, all for us, the freedom that we take for granted every single day.”

From the 11-person Armed Forces Color Guard from the Military District of Washington, DC and a military helicopter flyover, to a final roll call of both living Vietnam veterans and the dead and missing, the event gave overdue recognition to those who served in the war. The memorial – which includes the names of the 94 dead and one missing from Lower Bucks County – is a permanent reminder not to forget their service, sacrifice and suffering.

The memorial was created by the PA Vietnam Veterans Memorial Foundation, a grassroots organization that includes many members of the team that brought the Vietnam Traveling Memorial Wall to the area in 2017. The Wall in Bucks County drew upwards of 25,000 people during its July 14-15 run in Penndel. The event raised more than $31,000 in money and goods that were donated to local and national veterans causes. The foundation is chaired by Ed Preston, who also chaired The Wall in Bucks County and the Penndel-Hulmeville Memorial Day Parade.

The memorial was funded by state and local grants, and through various fundraising efforts. Donations to current and future projects can be made at lbcvvm.org

A grand opening is set for Nov. 6 on State Road in Bensalem
Read more
Langhorne-Levittown Times