A dedication event is set for Sunday, at 11:30 a.m. at Veterans Park in Middletown Township 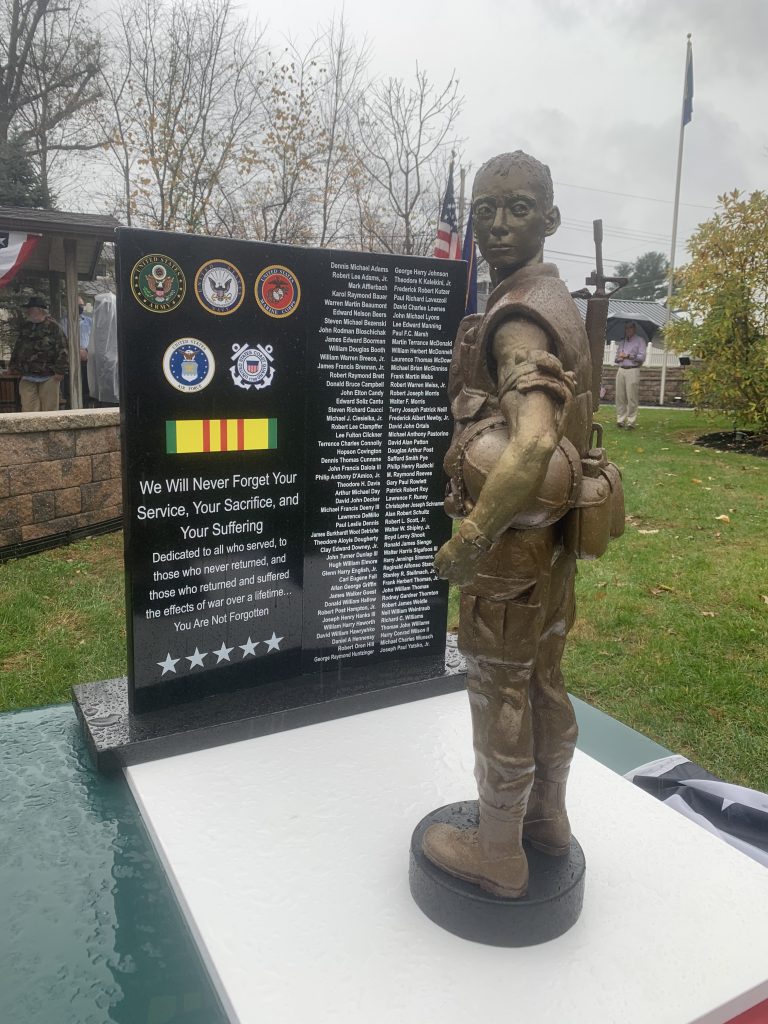 Local veterans of the Vietnam War – those killed in battle and those who survived but were shunned once home – will be honored on Sunday during the unveiling and dedication of the Lower Bucks County Vietnam Veterans Memorial.

The public is invited to the event, set for 11:30 a.m. at Veterans Park in Middletown Township. Bucks County author Jim McComb (More Than Names On A Wall) and four other veterans of the Vietnam War – Langhorne’s John Rumsey and Fran Drummond, Bristol’s George Delia and Falls’ Ed Sabol – will narrate the stories of the 95 Lower Bucks servicemen who never returned home from Vietnam. Former U.S. Rep. Patrick Murphy, a veteran of the Iraq War, and current U.S. Rep. Brian Fitzpatrick will also participate.

Three years in the making, the memorial is finally coming to life thanks to the efforts of a small sub-committee of the Penndel-Hulmeville Memorial Day Parade, which was also successful in bringing the Vietnam Traveling Memorial Wall to Penndel in 2017. More than 25,000 people came out to view The Wall from July 14-16, and donated more than $31,000 that went to local and national veterans causes.

According to committee chairman Ed Preston, the idea to erect a memorial came while he was working on securing The Wall. At first, his mission was to build a Pennsylvania memorial for Vietnam veterans, since one doesn’t currently exist. However, having never organized such a project before, he and several committee members decided to start small and create something for the 11 veterans of Langhorne Manor, Langhorne Borough, Penndel and Hulmeville. This soon expanded to include those from neighboring Middletown Township, and eventually, all of Lower Bucks County.

The memorial is a sculpture made by world-renowned artist Abbe Godwin. It depicts a soldier coming home from the Vietnam War and reading the names of his fallen brothers and sisters off a granite panel. This scene was inspired by a photo Preston discovered of a couple at The Wall searching for the name of their loved one.

“I thought, ‘Wow, that is the embodiment of exactly what The Wall represents and what it means to a family member, to look for that one name, find it, touch it, see it,’” said Preston.

In addition to the names of local fallen soldiers, the memorial includes those who served and came home alive.

“They got treated so poorly. Even though these men were killed and we remember them, in the end, they may have had an easier time,” said Preston. “So many men that came home couldn’t find jobs, you know, the baby killer, the spitting, all those things they went through, not being able to tell people they were in the war. The soldier shown coming out of the field, he’s going to be one of them.”

When reflecting on The Wall, Preston said the committee is still hearing about the positive impacts of it four years later. He described it as “the gift that keeps on giving.”

“The VA still today has guys that come in and say, ‘I’m here because I was at the wall,’” he shared. “We’ve helped thousands of veterans over it.”

Preston hopes that the memorial has a similar effect and sparks a much-needed conversation.

“They had a job just like I have a job running a bike shop. Their job was to go fight a war that someone said they had to go fight. It had nothing to do with them. They did what they were supposed to do. They were held accountable for that and they shouldn’t have been,” said Preston. “We hope the memorial engages people to think about what a soldier’s life really is, what a soldier’s life really costs, not to him but his family as well. We hope it can teach the younger generation that it’s not a video game that you see on TV. These are real people that carry a real burden their entire life from being in the war.”

At Veterans Park, the memorial will join others that honor those who fought in World War I, World War II and the Revolutionary War. There is also a small marker for a Neshaminy graduate killed in Afghanistan. Preston has heard from numerous Gold Star families in the area who said they can’t wait to visit this latest addition every day.

“And I know that some of the Vietnam veterans still live here locally. Though for us, they’re names and we have a book that tells us who they are, for those guys who served that came from Langhorne, Croydon, Bensalem or Bristol, they’re neighbors,” said Preston. “They’re guys who they went to school with, hung out with and played basketball with. They’re excited to be able to visit them whenever they want. I think it will be something that resonates with the veterans and families.”

Since COVID-19 dampered the committee’s fundraising efforts through most of 2020 and early 2021, Preston said donations to complete the cost of the $250,000 memorial are being accepted online. Local and state grants helped pay for much of it, but approximately $15,000 is still needed.

Once the memorial is unveiled, Preston plans to continue working toward his ultimate goal of building a Vietnam veterans memorial for the state of Pennsylvania.

A grand opening is set for Nov. 6 on State Road in Bensalem
Read more
Langhorne-Levittown Times