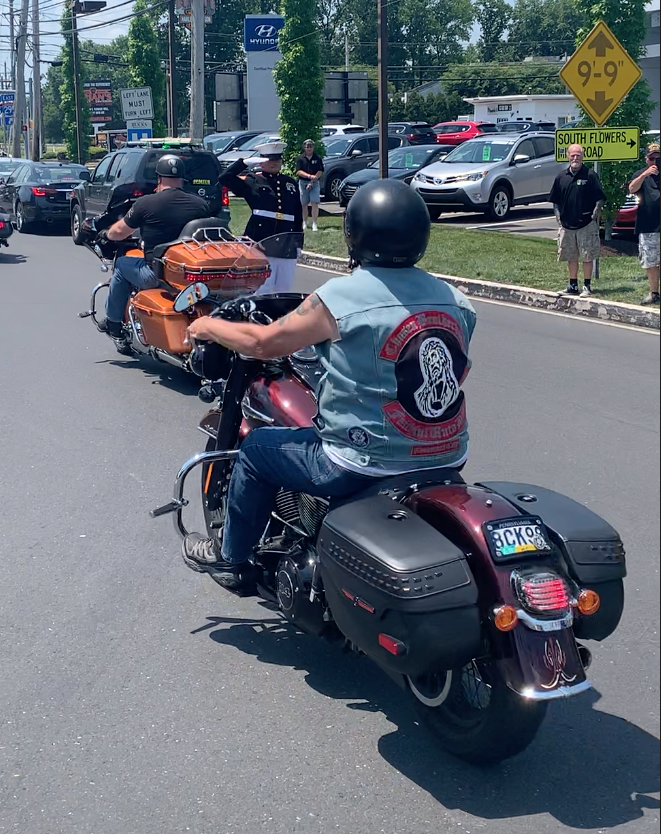 Tim Chambers, nationally known as the “Saluting Marine,” honored servicemen and women killed or missing in action in the Vietnam War, including 95 from Lower Bucks County, on Sunday, when he appeared at the Ride for the Fallen to benefit the Lower Bucks County Vietnam Veterans Memorial Fund.

Chambers, whose salutes have helped call attention to veterans’ causes throughout the country, was at Business Route 1 and South Flowers Mill Road at the end of Sunday’s ride. Kickstands went up at 10:30 a.m. for the ride, which went from Stars & Stripes Harley Davidson in Langhorne to the Bucks County Vietnam Veterans Memorial in Doylestown.

Hot dogs, hamburgers and drinks were provided at Stars & Stripes, with entertainment by Lynyrd Skynyrd tribute group Street Survivors Band. Cost was $25 per bike and $10 per passenger. Non-riders were invited to participate for $15.

For more than a decade, Chambers has held a salute in full dress uniform in the midst of the “Rolling to Remember” (formerly “Rolling Thunder”) motorcycle events in Washington, D.C. the Sunday before Memorial Day. A U.S. Marine Corps veteran, author and motivational speaker, he serves as a spokesperson for AMVETS. More information is at thesalutingmarine.com.

The memorial will be erected in September at Middletown Veterans’ Memorial Park on Veterans Highway in Middletown Township. It will include 95 names of servicemen from Lower Bucks County, including 94 killed in action and one missing in action. The memorial sculpture is being created by Abbe Godwin, a highly-regarded creator of works memorializing members of the armed services, and whose works include the Corpsman Memorial and the Peacekeeper statue at the Beirut Memorial, both at Camp Jackson in Jacksonville, North Carolina; and the North Carolina Vietnam Veterans Memorial on the grounds of the state capitol in Raleigh.

The anticipated $250,000 cost of the memorial is being funded by state and local grants, and through various fundraising efforts. Donations can be made at lbcvvm.org.

The PA Vietnam Veterans Foundation includes two veterans of the Vietnam War – Fran Drummond, of Langhorne Manor Borough, and John Rumsey, of Langhorne Borough. Chaired by Ed Preston, it includes seven members of The Wall in Bucks County – the grassroots organization that brought the Vietnam Traveling Memorial Wall to the area – as well as other civic-minded residents and members of the business community. Upwards of 25,000 people visited the Vietnam Traveling Memorial Wall during its July 14-16 run in Penndel in 2017. The event also raised more than $31,000 in money and goods, which were donated to local and national veterans causes.

The Lower Makefield resident won the state championship in the 100-meter hurdles, racing to a victory in 14.38 seconds to win the PIAA Class 3A title
Read more
Bensalem Times