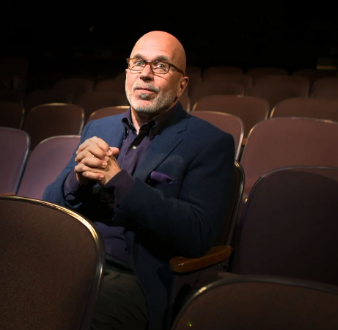 Michael Smerconish will have his first-ever television special aired for one hour on CNN this Saturday, July 11, at 10 p.m. Things I Wish I Knew Before I Started Talking was taped live on May 19 at Bucks County Playhouse in New Hope. He presented the entire show to an empty house, socially distanced with everyone involved, who were wearing a mask. It was professionally captured by his close friend of 40 years and independent television producer/director Chris Strand.

This one-man show commemorating Smerconish’s 30th anniversary in talk radio was originally planned as an autobiographical night of storytelling, intended to be funny, poignant and reflective.

“Beyond tracing my career while incorporating elements of still photography, audio and video, I offer serious thoughts on the [negative] impact of a polarized media,” he explained.

Several months ago, tickets were put on sale to launch this tour in Philadelphia. Two nights sold out immediately and a dozen dates across the country were about to be announced. Then, the pandemic hit. The Philadelphia launch was canceled, tickets were refunded, and the tour was postponed indefinitely.

“Where I had spent considerable time preparing the entire program, and in a climate of uncertainty as to when [and whether] I would get to share it with live theater audiences, I decided to deliver and record it,” he said. “The finished product is really two stories in one – my own memoir, and the way we recorded it in the midst of a pandemic. Frankly, the third angle is my favorite – my relationship with Chris. We went to Holicong together and both had the TV bug. He went to Temple for radio, TV and film. I went to Lehigh for government and journalism. While in college, we recorded a TV short that we tried to sell to HBO. They had no interest. But here we are, four decades later, doing a TV project together for CNN – and from just down Route 202 from where we went to school.”

While he hadn’t expected it to be televised, after the taping at Bucks County Playhouse, Smerconish showed a five-minute sizzle reel to Jeff Zucker, president of CNN, who immediately said he would air it as a one-hour CNN special.

When asked why he selected Bucks County Playhouse as the location, he said, “I launched one of my books there with a live event, I think it was my fifth, Morning Drive. And, I hosted a live, radio book club event there with authors Barlett and Steele a few years back. Plus, I’ve attended many shows there with my family.”