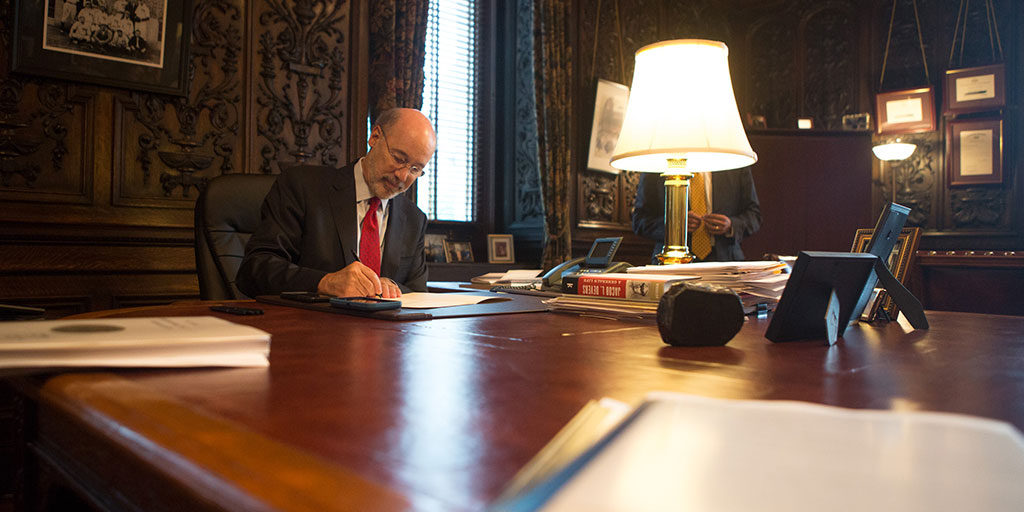 Building on his criminal justice reforms and fulfilling a recommendation to modernize job licensing, Gov. Tom Wolf signed Senate Bill 637, which removes outdated licensing barriers so skilled workers with criminal records can get a second chance and start good careers. The governor said he has advocated for sweeping changes to the licensing process for years.

The governor proposed reforms to job licensing requirements and licensing boards to remove barriers to employment so skilled workers can enter the jobs of their choice. In 2017, the governor signed an executive order requiring a review of job licensing with a comparison to other states and a task force appointed by the governor issued a report in 2018 outlining many proposals to cut red tape and modernize job licensing. The reforms include removing outdated criminal record restrictions. One-in-five Pennsylvanians need an occupational license from a board or commission to do their job, representing more than one million workers.

“Pennsylvania must be a place where hardworking people can put their skills to work,” said Wolf. “Arbitrarily denying someone a job license because of outdated rules against criminal records is wrong. This new bipartisan law is a commonsense way to allow people to pursue the American dream and build a better life in Pennsylvania. It’s good for skilled workers, their employers and the economy for all of us.”

The bill makes the following improvements for the 29 occupational licensing boards:

– Boards and commissions can no longer use a person’s criminal history to deny someone a license unless their criminal history is directly related to the occupation in which they are seeking licensure
– Directs boards to individually consider applications based on the offense, the amount of time since the conviction and the applicant’s personal progress and training, among other factors, before withholding licensure
– Requires boards to create a public list of criminal offenses that may prevent licensure
– Allows individuals to get a preliminary decision if their conviction is likely to disqualify them from licensure so they do not waste time and money on training; individuals can still apply and present evidence to support their licensure
– Creates temporary licenses in barbering and cosmetology for reentrants trained in a correctional facility who otherwise would be denied a license because of their criminal record; licensees can work one to two years and demonstrate competency

Boards cannot issue a license to someone convicted of a sexual offense to practice as a health care practitioner. Boards may not consider juvenile convictions or convictions that have been expunged under the Clean Slate law in determining eligibility. The Department of State and the licensing boards will develop a guide to help people with criminal convictions to apply for a license.

“The Pennsylvania Department of State has been a vocal advocate for professional licensing standards that protect the health and safety of Pennsylvanians and are free of unnecessary or unclear requirements,” said Secretary of State Kathy Boockvar. “We believe this new law is a step forward toward that goal. We applaud the legislature and Governor Wolf for making this much-needed reform in the commonwealth’s licensing laws.”

“Today’s signing of this legislation serves as a hand-up and not a hand-out to many justice-involved Pennsylvanians who have made mistakes, learned from them, and are actively seeking to improve their lives for the better,” said Board of Pardons Secretary Brandon Flood. “I would like to thank the Governor, the Pennsylvania General Assembly and Senators DiSanto and Schwank for their leadership on this critically important issue.”

Wolf said criminal justice reform and occupational licensure reform are both priorities of his. Yesterday was the second anniversary of the governor signing the landmark Clean Slate law, which allows individuals to petition the courts for their records to be sealed if a person has been free from conviction for 10 years for an offense that resulted in a year or more in prison and has paid all court-ordered financial debts.

The Wolf Administration also acted in 2017 to “ban the box” to remove questions about criminal histories from state employment applications. Banning the box allows applicants with criminal records to be judged on their skills and qualifications and not solely on their criminal history, while preserving the appropriate evaluation during the hiring process.