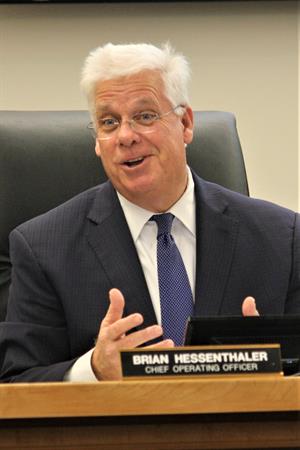 The county commissioners have named Margaret A. McKevitt, the county’s director of community and economic development, to serve as interim COO until a permanent replacement is named.

“Bucks County is a great place for a lot of reasons,” Hessenthaler said at a recent commissioners’ meeting. “You look at the museums, you look at the open space, you look at the covered bridges, you look at the diversity within the county, and it’s fantastic. I’ve always said I’d put Bucks County up against any county in the commonwealth. One of the greatest assets is the people. The people that work here have been great for 15-plus years, and I just want to thank you.”

Hessenthaler was hired in June 2004 as director of the county’s Finance and Administration Division after a 21-year career with Better Materials Corp., where he served as senior vice president and chief financial officer.

Under his leadership, the county maintained a level of fiscal discipline that enabled it to build its financial reserves, avoid tax increases in most years and, in 2010, attain for the first time an Aaa bond credit rating from Moody’s Investors Service. Four years later, Standard & Poor’s also bestowed on the county its highest AAA rating.

The county continues to hold both ratings, which make it easier for it to raise money while keeping its debt service costs at a minimum. Hessenthaler has called that financial performance the proudest achievement of his county government career.

He was promoted to chief operating officer in April 2010 by a unanimous vote of Republican Commissioners James Cawley and Charles Martin and Democrat Diane Marseglia.

Marseglia, who now chairs the Board of Commissioners, paid tribute to Hessenthaler’s helpful, apolitical style during her contentious early days.

“Those first few years were very rough for me,” she said, “and things took a turn for the better when you became the COO and (former) Commissioner (Robert) Loughery arrived (replacing Cawley). I have to say that you have always treated me with fairness, and I’ve watched you treat everybody else with that same fairness.

“In all of these years there is not one second when I have doubted your honesty, your courage, your commitment, your energy level and your ethics. We may have some political differences but you’ve never been political with anything. That’s not easy to do in these positions, and I really appreciate that you have run your office that way. I’m sorry you’re leaving, but I wish you well.”

As the ultimate manager of the county’s massive workforce and operations, Hessenthaler was known as an inclusive, approachable boss who kept his employees well-informed and his door and mind open to new ideas and suggestions.

Hessenthaler valued honesty and accountability, lavished praise on the achievements of others, shunned the spotlight himself and held no grudges after tough discussions over labor contracts, policy decisions and other contentious matters.