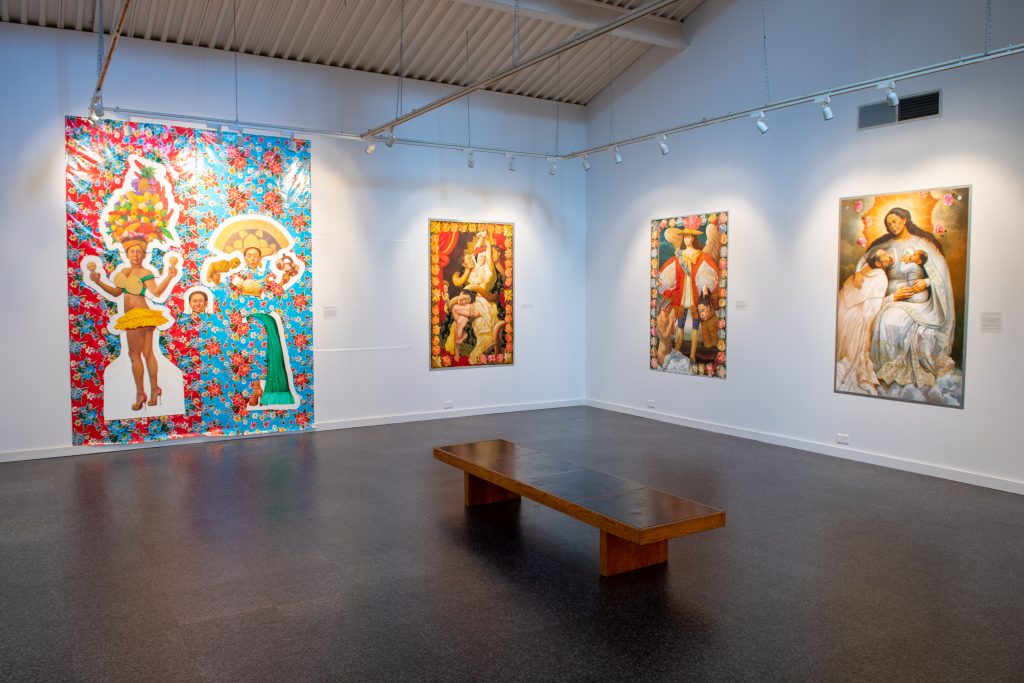 The Hicks Art Center Gallery at Bucks County Community College opens its 2019-2020 season of exhibitions with “Kukuli Velarde: The Complicit Eye” through Oct. 19.

A gallery reception took place on Wednesday, Sept. 18, from 5 to 7 p.m. at the college’s Newtown campus, including an artist’s talk at 5:45 p.m.

In the exhibition – part of the Bucks LatinX Heritage Month celebration – the Peruvian-American artist paints herself in the roles of female archetypes to express her intersectional feminist critique of patriarchal society.

“For centuries, male painters have exalted the curves of the female body’s immaculate skin, gravity-balanced masses of youth as though their works were a tribute,” Velarde wrote in her commentary about the exhibition. “The exhibition of my body through my work is not a favor to its self. My body is not an object to be given away with any resemblance of pride or humility. My body is me.”

Some of the paintings in “Kukuli Velarde: The Complicit Eye” depict full nudity.

Velarde has received awards and grants such as the Guggenheim Fellowship, the Pollock Krasner Foundation grant, the United States Artists-Knight fellowship, and the Pew fellowship in Visual Arts, among others. In 2013, her project CORPUS earned the grand prize at the Gyeonggi Ceramics Biennial in South Korea. “The Complicit Eye” was first shown at Taller Puertorriqueño in Philadelphia.

Velarde earned her BFA at Hunter College, University of New York. She lives in Philadelphia with her husband, sculptor Doug Herren, and their small daughter. To learn more about the artist, visit kukulivelarde.com.

The Hicks Art Center Gallery is located on the Bucks campus at 275 Swamp Road, Newtown. Parking and admission are free. For more information about “Kukuli Velarde: The Complicit Eye,” including a list of gallery hours, visit bucks.edu/gallery or call 215-968-8425.

Cairn Chorale to perform at 1867 Sanctuary at Ewing

Couture for the Cure