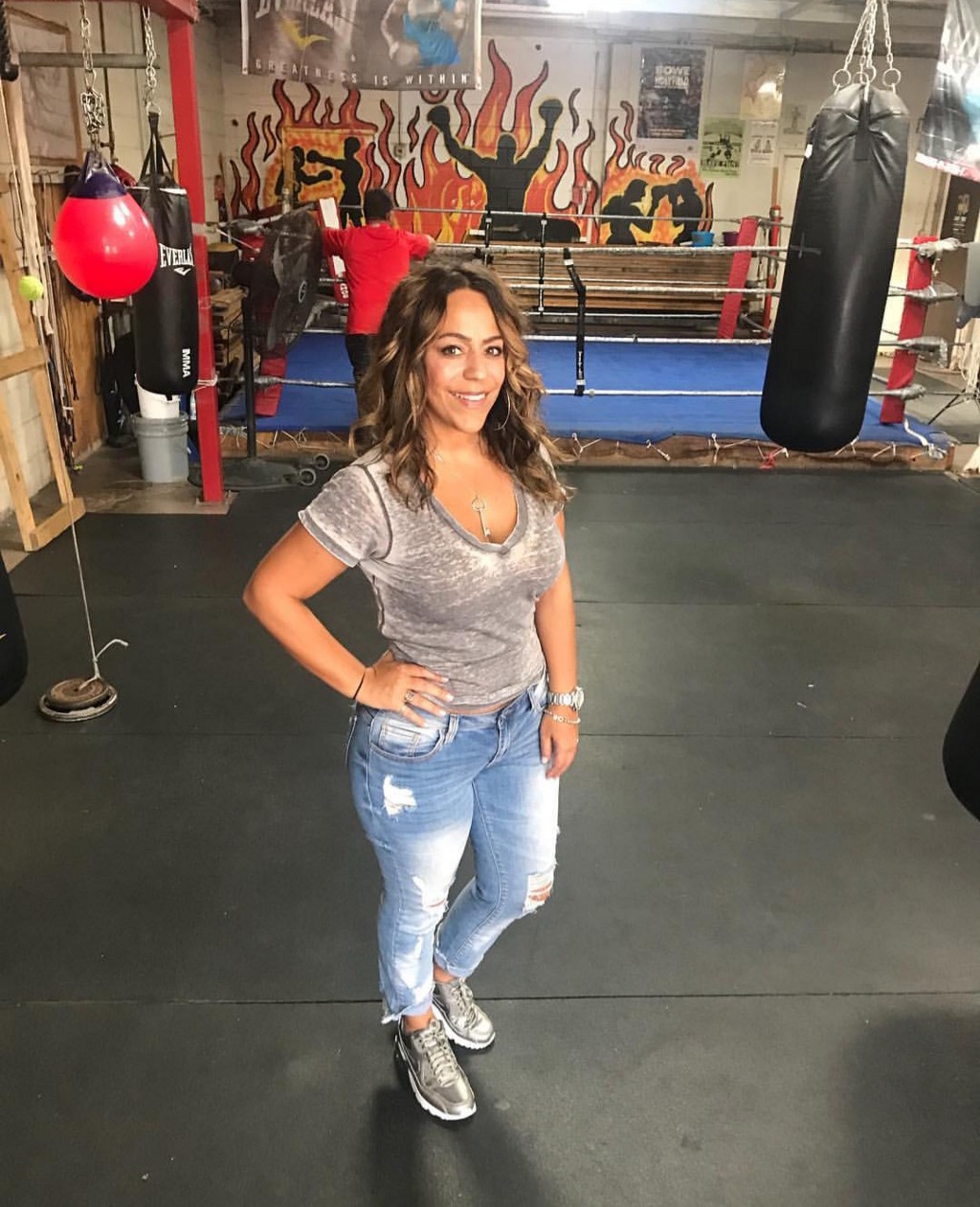 The late Anibal “Kiki” Rosado was a force to be reckoned with in Bristol Borough before his untimely passing in 1997. A local resident from the age of 6 after his family immigrated from Puerto Rico, Rosado worked tirelessly to achieve success. He attended school, worked as a chemical engineer, and immersed himself in the community, co-founding the Latino Leadership Alliance of Bucks County on Mill Street, serving as school board president and running for mayor, despite receiving backlash due to his race.

And he did it all while fighting a 20-year battle with thyroid cancer.

Rosado knew he wasn’t going to live forever. So when his daughter Michelle was born, he made it his mission to instill in her those same values of independence, grit and determination. She would never have to rely on a man for anything.

Today, Michelle is truly her father’s daughter. Well-educated and tough as nails, she is the founder and CEO of Raging Babe, which develops marketing campaigns for boxers.

On Friday, Feb. 8, Michelle is staging her first card in Philadelphia at the 2300 Arena. Dubbed “Philly Special,” the event will feature some of the top area boxers, including South Philly’s Christian Carto, who is headlining the eight-card fight.

For Michelle, the impending “Philly Special” has sparked a slew of emotions — pride, excitement, and yes, even fear.

“It’s scary, coming into Philly. It’s very intimidating. This is a boxing city. People across the country, they call Philly the ‘boxing capital,’” Michelle said. “You have to do a good job in Philly. You can’t fool the fans, you can’t fool the fighters. You can’t pull the wool over their eyes because they know boxing. And me coming in? They’re going to expect a good show. Philly is cutthroat, man.”

But Michelle is confident her upbringing has prepared her accordingly. For starters, she was immersed in the world of boxing at an early age. Thanks to her father’s deep passion for the sport, she became familiar with legends like Sugar Ray Leonard and Mike Tyson.

In addition to an early love for boxing, Michelle also credits “Kiki” for the strength and competitiveness she confidently exudes. Growing up, if she got three home runs and one strikeout during a softball game, he would focus on the strikeout and how she could improve.

Michelle said “goodbye” to her father on the evening of her prom, arriving at the hospital in her gown to be with him during his final hours. After graduating from Bristol High School, she moved to Pittsburgh to study mechanical engineering, another nod toward Rosado.

“I still don’t know how I got through that time, but I think that’s why he built me the way that he did. Tenacity. Be relentless, be courageous,” she said. “I think he knew that maybe that day was going to come, and he didn’t want me to fold like a napkin.”

Eventually, Michelle transferred to Temple University to complete her degree and in 2005, transitioned to Phoenix, Arizona, to climb the engineering ladder. There was an abundance of career opportunities, but she began to miss the boxing scene, something that was sorely lacking in her new city.

But things changed in 2010 when she serendipitously encountered an amateur boxer from Philadelphia who dreamed of turning pro. He couldn’t find a fight, and Michelle, despite knowing virtually nothing about the inner workings of the boxing industry, offered to help him. She started making calls, attending fights and picking the brain of matchmaker Mike Sanchez, whom she also met by chance in Phoenix. After nearly nine months of working behind the scenes and gaining knowledge, she put together her first show, which sold out.

“I had no clue what I was doing, but I was passionate about the sport and I used my engineering background to help me on the business side to be organized, analytical,” she said.

When the Phoenix New Times published an article on Michelle, the title “Raging Babe” plastered across the front page, she knew she had found her brand as well as her calling.

“She [Raging Babe] is any woman who has challenges, breaking barriers, pioneering,” Michelle said. “She could be a soccer mom, a cancer patient, a teenager, someone like me.”

Shortly after, Michelle met on Facebook Brittany “Bam” Rogers of the Feasterville-based Joe Hand Promotions, who wished to introduce her to J. Russell Peltz, a boxing Hall of Fame legend and promoter. Michelle knew it was the next step forward and made the move back to Philadelphia. Over the past five years, Peltz has become something of a father figure to her, showing her the ins and outs of the local market.

“I like to say I was carrying the spitbucket. I was cutting my teeth with them, learning, asking questions,” she said, explaining how his mentorship helped prepare her for “Philly Special,” which will also celebrate Peltz’s 50th year in boxing. “Philly has such a rich, boxing history and there are promoters here that do a good job, but I felt like we still had to do our thing. We have to do it our way because we do a lot of old school things that the boxing community still appreciates. And then I put in my little new school twist.”

To look back on how far she’s come in such a male-dominated industry, to reflect on the years that saw bricks flung through her car window and tickets thrown in her face, Michelle feels an unwavering sense of pride. Like her father, who faced challenges on a daily basis, quitting was never an option.

“That’s why I’m where I’m at today. I saw him fight against the norm, battle diseases, battle people, battle racism,” Michelle said. “I’m always about raising my own bar and trying to get to the next level and doing bigger and better. And that’s where I get it from. It comes from my dad and those Bristol roots.” ••