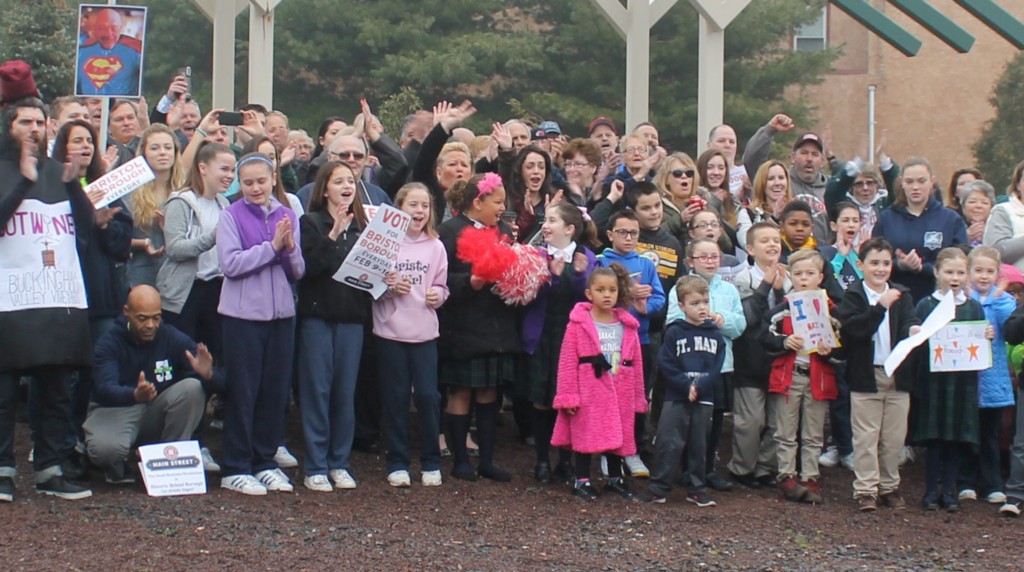 Amanda Brinkman was all but unknown in Bristol Borough just six months ago. But last week, just the sight of her walking onto the stage at the Bristol Riverside Theatre, no words necessary, was enough to send the packed house into an explosion of cheers and palpable excitement.

Her presence could mean only one thing: After months of organizing and campaigning, Bristol Borough would be featured on Season 2 of the Small Business Revolution documentary series.

But, as she said when the cheers finally died down, “This is just the start of the journey.”

The turn will put the town in a national spotlight — even more so than the contest to earn it already has — as Brinkman and co-host Robert Herjavec from the show Shark Tank will work with local small businesses to help them grow and continue revitalizing the town’s business district.

The production works quickly: By Monday, businesses on and around Mill Street applied to be featured on the show. Those efforts come with a $500,000 budget, and will be broadcast in an eight-part series on the Hulu network and the Small Business Revolution website.

Filming begins March 6 and will continue off and on through June.

It’s a huge boost for a town that’s already in the midst of a revitalization — and one that gave Bristol a renewed sense of unity and vigor, even before the announcement was made.

“This contest has awoken a sleeping giant and filled it with resolve,” said Bill Pezza, president of the Raising the Bar Committee, moments before the announcement.

“We do the best we can here, and nothing’s going to hold us back.”

To win, Bristol first earned a handful of nominations for the contest after Pezza first publicized the opportunity last fall.

After reaching out to last year’s winning down, Wabash, Indiana, for strategy ideas, Pezza spearheaded an online campaign to get the group’s attention. Residents and business owners made short videos featuring the slogan, “Pick Us!” while others highlighted what made the town special on social media using the hashtag #mybristolborough.

The Small Business Revolution staff put Bristol on its shortlist of eight towns nationwide, sifted from some 14,000 nominations, and scheduled a two-day visit in January with a film crew.

After that, Bristol learned it made the final five on Feb. 9. That same day, the company opened a week of online voting, where the winner would be the Season 2 feature.

To beat out the other towns with larger populations, Bristolians reached out to friends, family and professional contacts way beyond the borough to vote.

By the time voting began, it was apparent that what has started as a way to get some money for small businesses and perhaps some notoriety for the town became a rallying point for residents.

Signs went up in store windows, and Facebook pages blew up with posts about the town and the contest. People made special trips to Mill Street when the film crew was in town and replaced “hello” with “Did you vote today?” as a greeting during the online voting period.

At a pep rally midway through the voting, representatives from high schools, colleges and businesses across the region spoke about their efforts. They’d sent emails to thousands of employees and reached out across their own networks.

It culminated two Thursday ago, with handfuls of Bristolians in their homes and at schools and libraries logging as many votes as they could before the deadline. After ceding an early lead to Red Wing, Minnesota, toward the end of the voting, the town rallied to get as many notches as possible.

Then, last Wednesday, around 250 residents heard from Pezza, Bristol Mayor Joe Saxton and community volunteer Craig Whitaker while they waited for the announcement.

Not all of them lived in Bristol, of course. Some just owned businesses, or lived nearby. Others, like Jeanette Dorey, timed a trip from Massachusetts with the announcement date to be here for it.

“I’ve been voting every day, my husband, too,” she said.

Dorey was planning a trip soon to visit family anyway, “But I made sure I came down for this.”

But, no matter a person’s place of residence, everyone in the theater, as Saxton put it, are “All Bristolians today.”

And, a few minutes later, so was Brinkman.

The crowd quieted as the live video announcing the winner began. Projected on a screen onstage, Brinkman talked about the contest and the towns left in the running.

Just as the winner was about to be announced, the light came up slightly on stage, and she appeared in person.

The crowd went wild. And, albeit in a more understated way, so did she.

“I am really excited,” she said. “You guys did this. Think of how much you’ve accomplished together.”

By all reports, the appearance was a surprise — Pezza himself, who, Brinkman said, was referred to in the other towns as “Bill ‘That guy ain’t messing around’ Pezza,” maintains he found out only moments before her appearance when someone spotted her in the parking lot.

Brinkman herself, after the event, admitted she was hunched down in her car waiting for her moment, and had to motion to a few passersby who spotted her not to spoil the surprise.

But, perhaps after all that work, it shouldn’t have been that much of a shock.

The Small Business Revolution won’t release the exact numbers, but Brinkman confirmed there were nearly 1 million votes cast and Bristol won thanks to a solid, steady stream of votes the entire time from literally around the world.

In the end, the numbers don’t matter, just the outcome. Pezza says he doesn’t care if they won by one vote or a million. What matters is they made it.

It was an emotional moment for Pezza, perhaps even more than others in the room, who realized what they’d achieved through all their hard work and perseverance.

One of them was Craig Whitaker, whom Pezza credited with being an amazing resource throughout the process.

Whitaker took a moment to speak as well about how everyone in town rallied together and unified for a single cause.

“We will never forget this moment in our lives,” he said. ••