Gobblin’ for the glory: Yardley resident to represent Bucks at Wing Bowl 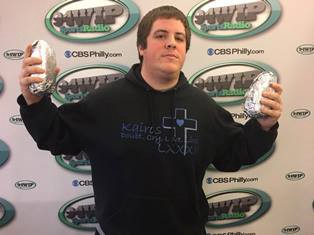 Michael Warren didn’t try out for the Wing Bowl just to compete for bragging rights. He was also looking to kick off his career.

As far as the latter goes, he’s already succeeded.

The chicken wing-eating contest, hosted by 94.1 WIP, is celebrating its 25th anniversary this year. It kicks off at 6 a.m. at the Wells Fargo Center this Friday.

To get in, Warren had to try out on the air. When he arrived at the radio studio last month, he wanted to walk away with two things: a seat at the contest, and a job at the station.

“It was a way to get an in,” he laughed. “When I was done I told them I’d even start as a janitor and work my way up.”

Fortunately, instead of a broom, Warren got some contacts and good advice on where to go next for school. Now, he plans to attend Temple University next year based on what he’s heard, and is in the running for an internship at the station over the summer.

“Everyone there was really helpful. It really helped solidify my decision for college,” said Warren.

Before that, however, he’s going to eat a lot of wings.

Focusing on technique over pure speed, Warren said he is adopting the Sixers mentality:Trust the Process. He began training by chewing and eating a pack of gum at a time, then graduated to becoming as efficient as possible downing 10 wings at time.

It helps, he noted, that his father is owner of the Pine Tavern in Bristol Borough, and brings him home practice wings.

In fact, Warren attributes his heavier high school years for the stunt that got him in the door.

While eating at a Chipotle with his friends a few years ago, he said he could eat two of the restaurant’s large burritos in five minutes. The waiter offered to pay for the meal if he could pull it off.

Warren dined for free that night, and revived the stunt for his tryout at WIP — giving himself seven minutes, just to be safe.

Now, armed with a nickname, a logo and t-shirts, he’s ready to represent the county, and has a good deal of support behind him.

Warren’s father, he noted, participated once in the Wing Bowl years ago when the Eagles were in the Super Bowl. His girlfriend’s grandfather has been to every single event — once even checking himself out of the hospital while recovering from a heart attack to attend.

“He’s been one of my biggest supporters,” said Warren.

Even with all that history behind him, Warren’s still just looking to have a good time during his first visit to Wing Bowl, as a contender or spectator. It’s also not lost on him that there are rumors this year’s event, the 25th, may be its last.

But for now, Warren’s just eating, training and even getting into the occasional online battle with former contestants and other competitive eaters.

It’s all in good fun, however, with Warren noting he’s also now friends — on Facebook, at least — with just about everyone he’s been speaking with.

“This has all been been a great journey. I’ve been blessed to know a lot of good people and have so many people supporting me,” he said.