WireENTERTAINMENT — Come out and play: The Invitational is New Hope’s under-the-radar, all-star band 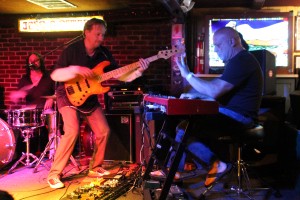 The Invitational at John and Peter’s in New Hope doesn’t have much in the way of rules, but it seems to have an unofficial dress code: blue jeans and a black T-shirt.

That’s the attire of choice for the five musicians on the small stage. They’re a group of players that don’t need to act — or dress — flashy in order to impress the audience. In fact, that’s not even much of the reason why they’re here.

“It’s like a ’70s garage band in the suburbs,” said keyboardist Bill Levinson. “It’s a place to come and play pretty freely.”

Levinson founded the Invitational, which performs every Wednesday night at the renowned, intimate club, four years ago. The lineup is a casual, rotating cast of touring and studio musicians who live in New Hope, chosen weekly from a select group and based on who’s not on the road or in a session that night.

There are only two rules for the group: no set lists and no rehearsals.

“That’s one of the great pleasures of it. You don’t have to worry too much about it. We just show up and play, and sometimes magic happens,” he explained. “We want it to be spontaneous.”

It’s a chance for professional players to take a break from the rigors and requirements of their career bands and get back to the absolute basics: playing music for the fun of it. And, last Wednesday night was no different.

Perched on a milk crate out back of the club before the gig, Levinson predicted a usual night: Plenty of open-ended jamming, opportunities for the band to stretch out musically. They’ll also choose some cover songs on the fly, tunes they’ll “do either beautiful or horrible things to,” he joked.

He, along with guitarist Mickey Melchiondo, perhaps better known as Dean Ween from the band Ween, are sort of the de facto leaders of the Invitational. As it was Levinson’s idea, he makes the calls each week to see who’s available.

Melchiondo, he says, is just as committed and a driving force behind it, taking part whenever he can and even writing some songs with Levinson on the side for the gigs.

However, they, like the other regulars, don’t make it when their regular bands are working. Melchiondo isn’t here tonight, for instance. He’s wrapping up a tour with the Moistboyz, one of his several projects. And, in a few months, Levinson will leave for Key West, where his band plays through the winter.

Last week, Levinson was joined by guitarist Joe Kramer, who also plays in Melchiondo’s Dean Ween Band, and bassist Ed Iglewski, whose credits include work with members of the E Street Band and Bon Jovi. On drums and vocals was Joe D’Angelo from the Billy Walton Band.

“We’ll try to play anything you ask us to,” said D’Angelo from the stage to the small, still-growing crowd. “If you write it on a $50 bill, we’ll really try,” he joked.

The group had just started its first set with an open-ended jam that it settled on just before starting: The actual set began with no fanfare, just Iglewski playing a funky, flowing bass part and Levinson calling out the chords. He’s soon followed in by Kramer, and then D’Angelo on a heavy, ego-less backbeat.

Over the next 10 minutes, it twists and turns, ebbs and flows. Kramer guides it into a country rock feel during his solo, for instance, before it adopts some fusion elements when Levinson, keyboard set firmly on a ’70s Fender Rhodes sound, takes his turn.

“That one was called, Refill Your Bong,” joked D’Angelo to the crowd, which has doubled in size since they started. From there, they play some cover songs, but ones that are far from the usual bar band fare.

“Them Changes” by Buddy Miles gets a high-energy run, with D’Angelo pulling off both vocals and some swift drumming. The Meters’ funk standard “Cissy Strut” receives an extended treatment, with Levinson calling stops and solos from his spot and leaning in with Iglewski at times to weave in and out of extended improvisational sections.

They’re far from note-for-note renditions, but plenty of fun gauging from the level of concentration on stage and toe-tapping — and light dancing — from the crowd.

And, after a return to “the easy stuff” with a relatively straightforward rendition of “Powderfinger” by Neil Young, an audience member takes D’Angelo’s previous offer perhaps a little too seriously. He approaches the stage with a smile, dollar bills and a list of songs from Genesis, Jackal and Led Zeppelin.

The band defers for a moment, and offers to try the song “No Quarter” later in the night. They crash into the garage classic “Summertime Blues” instead, before a virtuosic instrumental jam. The set ends with “Never Been to Spain,” a song by Hoixt Ashton, covered by Three Dog Night, and according to D’Angelo, requires you to be “over 50 to know it.”

The crowd, whether they knew it or not, enjoyed it all the same, as D’Angelo ended the set with a variation of Levinson’s original outline of the group.

The Invitational plays every Wednesday night at John and Peter’s, 96 South Main St. in New Hope. For information, visit www.johnandpeters.com.