WireENTERTAINMENT — Old friends: Looseleaf gets the band back together 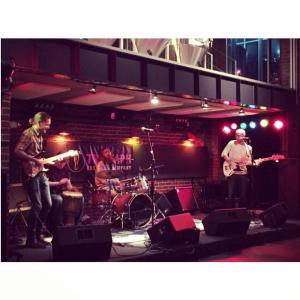 A few years ago, you could catch Looseleaf Trio’s unique combination of jangly pop and funky rhythms at any number of places from Bucks County down to South Philadelphia five nights a week.

They were the kind of band whose motto was “Dancing encouraged,” and while plenty people took them up on it, their catchy melodies and expert harmonies were more than enough to satisfy the wallflowers as well.

Their influences ranged from Tom Petty or even later Red Hot Chili Peppers to Americana roots music and plenty of Lennon/McCartney. But more than any of those, their appeal was the sound of three guys in their early 20s who’d already been playing together for nearly a decade.

“We’ve always been good friends who enjoy playing together. It’s the closest bond we have,” said bassist Andrew Napoli.

Those days have since passed, but for the month of May only, they’re back at Triumph Brewing Company in New Hope. Well, sort of.

When Looseleaf stopped playing shows about two years ago, it was an opportunity to start making music with new people. For Napoli at least, that meant new bands and old favorites. His steady gig has been Beatles Night at Connie’s Ric Rac near his home in South Philadelphia.

Based on a format he and Looseleaf guitarist Rhett Tierney started years ago at the Tulip Hookah Cafe in Langhorne, once a month he opens the night with a few acoustic Fab Four tunes. After that, he joins other musicians to delve further into the band’s catalog, which usually ends up as a “big electric jam” by the end of the night.

“It’s a lot of fun, getting new people in each week. I’d play songs I’d never played before,” said Napoli. “It was cool playing bass if someone else was playing guitar. There are a lof of underrated McCartney riffs I got to experience.”

And, it’s an experience that colors his latest band, the Berries. A trio comprising Napoli, longtime friend Ryan Lutz and Emily Drinker, the group matches their own bright, acoustic-based pop songs with similar renditions of the Beatles and other ’60s groups like Simon & Garfunkel.

The group plays regularly, including a jaunt down to Austin, Texas for a few sets at the famed SXSW music festival. The Berries, in fact, were originally slated to pick up the Tuesday night residency at Triumph.

But when some scheduling conflicts came up, Napoli saw it as the right time to get the old band back together, albeit with some extra members and for a limited time only. They’ll play all night, a mix of cover songs and their own work.

Along with playing regularly at Triumph already, Napoli had been jamming again with his old bandmate Tierney, who has his own solo EP coming out soon.

“We’d been spending more time together again, and with him being available it worked out well,” said Napoli. “It’s great to play with a singer and musician like him.”

The band’s billing as just Looseleaf, since at this point they’re not a trio: Jake Hager, who contributed some keyboards to the trio’s album, is in the lineup along with percussionist Tim Leslie. Original drummer Keith Boehm plans to join them when he can.

“We’re probably gonna have to get off some rust before the show,” laughed Napoli, “But it’s gonna feel as good as ever.”

It’s been a few years since the band played together, and even more from when they were just three kids playing together. “We started at the bottom, playing all these tiny little places no one wanted to play,” recalled Napoli. “But we never looked at it like that, it was always playing to get somewhere better.”
And eventually they did, graduating to Xfinity Live and McFadden’s near the sports complex in South Philadelphia, and respected venues like John & Peter’s and Triumph in Bucks County.

Now, it’s all for fun, for a few weeks, and while they’ve all grown as musicians, there’s something, Napoli said, about going back to where they started.

“You remember what you loved, and you fall right back into the same tendencies,” he explained. “We do the same things and knowing what each other are going to do. That’s what makes a band good and that’s what we developed together.”

Looseleaf will perform at Triumph Brewing Company, 800 Union St. in New Hope, on Tuesdays in May starting at 9 p.m. No cover charge. For information, visit www.triumphbrewingcompany.com or www.cdbaby.com/cd/looseleaftrio.