Arkoosh was handpicked by Commissioners Chairman Josh Shapiro and voted in by the County Court of Common Pleas judges in January to fill the seat of former commissioner Leslie Richards after she took a job with the Wolf administration as secretary of PennDOT. 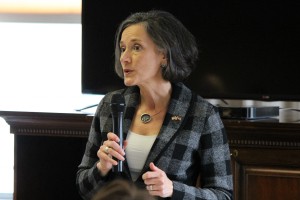 Arkoosh pointed to the 2011 election of Shapiro and Richards as commissioners as a major step to turning around Montgomery County finances.

“The county had a very significant operating deficit. There was so little cash in the bank for the county that they actually had to borrow money to make payroll in the first quarter of 2012,” she said. “In 2013 and 2014, we have actually run a surplus.”

Arkoosh claims that these gains were made through zero-based budgeting implemented in 2012, where commissioners approved each line item of a budget rather than approving a baseline created in previous years and moving forward.

“When Josh and Leslie came in, they asked each department head to start with not last year’s budget and build on it, but start with a blank piece of paper,” Arkoosh said. “Rather than just tweak around the edges, they took a fresh look.”

Apparently, they found that there was miscommunication among departments where many of them were doing the same things and other areas that could be consolidated and streamlined.

Cleaning up the redundancy allowed the operating budget to fall, and the county was able to place a recommended 10 percent, or $40.2 million, aside in 2014 for a “rainy day fund” to be used in the event of future deficits or county emergencies.

Another topic Arkoosh touched on is the human services available in the county and how they were improved over the last three years.

The offices are staffed by what Shapiro called specially trained “navocates”, who both navigate the system for the client and advocate on his or her behalf to get the needed government services.

“There’s no wrong door for human services in this county,” Arkoosh said.

The Community Connections office in Eastern Montgomery County is located in Willow Grove.

Arkoosh said that the 911 call centers have also been consolidated to one in Eagleville that dispatches people within the appropriate municipality to respond to emergencies.

“It was getting rid of a lot of that redundancy that helped us get those budget numbers that you saw,” she said.

Along with this, Montgomery County is working to make sure that municipalities interested in providing first-responders with Narcan, a prescription medicine that blocks respiratory depression during an overdose, can get it as quickly and affordably as possible. Abington Township recently authorized its police force to have it.

Arkoosh also touched on the Office of Aging and Adult Services in the county, which helps with fraud, scams and exploitation of seniors and helps prevent these things from happening in the first place.

“These things tend to come in spurts,” Arkoosh said.

She also mentioned TransNet, a shared ride program in Montgomery County that seniors receive a significant discount on. It can be used for anything from a doctors appointment to running errands.

“This is what works in a democracy, when everybody gets together and talks about these issues and expresses their opinions,” Arkoosh said. “It just makes me so happy to see all of you here today.”