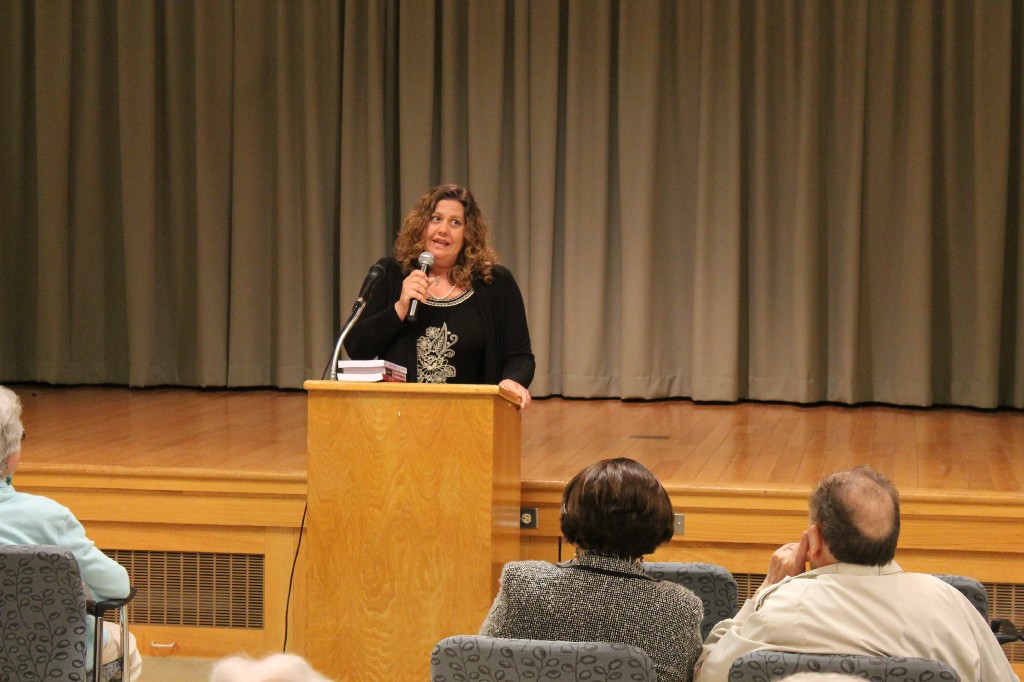 Local author reflects on the inspiration for her mystery novels

Abington author Wendy Tyson is at once disturbed and intrigued by society’s malefactions. Her interest in crime and mystery, though, stems not from a need to indulge criminal acts, but from the want of justice.

“If you think about it, real crime is gritty. Victims go unvindicated. Criminals go free. Despite the efforts of police and the valiant efforts of those in the legal world, that’s the way it is.” she said. “But not in my books.”

Tyson has now published two novels, with the third, Deadly Assets, set to be released in July. A mother of three boys and a practicing attorney, who works mostly with retirement plans, Tyson takes solace in knowing that in the world of her stories, she decides the fate of the characters.

On May 20, Tyson spoke to a group assembled at the auditorium at Rydal Park in Jenkintown about her creative process, and offered insight into the challenges and joys of being a published author. She referenced her background and degrees in counseling psychology and law as inspiration for her writing.

Often, her characters include women as both the victims and the heroes, a dynamic that stems from her experiences working as a therapist in the Scranton area before attending law school at Villanova. Many of her clients were women, and a lot of them had been abused or neglected throughout their lives.

“I saw an incredible spirit in those kids, and a lot of humanity, but I left there with a lot of anger. I felt like there was so much injustice in the world,” Tyson said.

It is important to note that Tyson does not use her former clients as source material, but as a reference point to emphasize and understand the point of view of women in regard to abusive crime.

However, much of her inspiration for stories and plots does come from places and scenes in her personal life. She referenced the conception of some of her ideas taking place during visits to Greece and to a casino in the Poconos, but many of the ideas remain close to home.

“Plot is important, but character is probably more important,” she said. “You can’t discount the fact that setting is often a character, and it’s been a privilege to write about the Philadelphia area.”

For example, The Seduction of Miriam Cross, her second novel to be published, takes place in Jenkintown and details a fictional investigation of a missing person by a motley crew of female private investigators. The group includes a displaced cowgirl from Wyoming who lives in Bucks County, a militant homemaker, a former stripper and a former nun. Without giving too much away, the story involves the investigation of the beheading of a feminist literary author named Miriam Cross.

Despite the often-obscure nature of her stories and the wildly surreal situations her characters may find themselves in, Tyson retains control over each page turn and plot twist with a certain end in mind.

“You might think that all crime writers are psychopaths or have that potential, and maybe those of us that like reading these series have a little psychopath in us as well,” she said. “But the great part about writing and reading crime fiction is that you get to have justice in the end.”